On Thursday, I shared an image of Abbot Hall, Old North Church and the new St. Michael’s steeple captured on a recent dawn morning.  This composition was what really brought me out on that day and it could not have happened without the help of three people.

Ulrike Welsch is a phenomenal local photographer and I happened upon her image of Abbot Hall and Old North Church juxtaposed so that it wasn’t clear which was in front of the other.  I commented in the prior post that I learned the location of this shot from Uli but was dismayed to hear that it was shot with a 500mm lens (and still required some amount of cropping).  With that knowledge and given the difficulty of timing this shot given its location, I reluctantly gave up hope of trying to replicate it and add my own interpretation of the scene.

During the lunar eclipse last month, I spotted Alex Falk’s image of the moon and took note of the 600mm lens that he used to capture it.  Suddenly this image was back in reach and I sought Alex out to see if he might be willing to lend me the lens to try to capture this iconic view of Marblehead’s tallest landmarks.  With the gigantic lens in hand a few days later, I went on a scouting trip with my son only to learn that 600mm wasn’t quite long enough…

Jared Charney (another great photographer in town) came into play at that point as I knew he had a small extender that would serve to take Alex’s 600mm lens and allow it to reach a full 840mm.  One more call and a quick drive got me the final piece of the puzzle.

All that was left at that point was heading out to this spot on an early morning and hoping for good light.  The clear skies were not what I had hoped for but ended up making for a perfect backdrop.  I started shooting the scene you see above with the golden light of sunrise reflecting off the buildings and bringing out the Fall colors in the trees.  I still wanted some element to distinguish my shot from Uli’s and that was when I spotted the birds.  They would fly off en masse and return to perch atop Old North Church seemingly at random.  I waited for the next moment and captured this view.

This is the 1,300th image of Marblehead shared on my website in the past 5 years and, in that time, I have never knowingly copied another photographer’s composition.  When I saw Uli’s photo, I felt I had to make an exception and try my hand at her perfect composition of Abbot Hall and Old North Church.  I hope mine stands on its own without coming across as derivative of her original work.

Below is Uli’s image for comparison.  Click on the photo below to be taken to her website filled with beautiful scenes from Marblehead and the rest of the world. 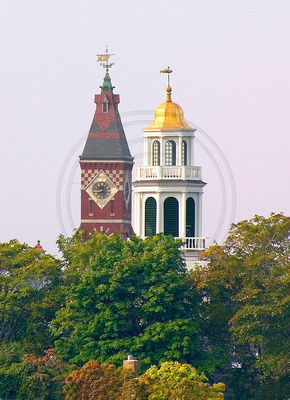 No more Facebook or Instagram algorithms to tell you what you want to see or think. Let’s keep it simple with one email once a week that includes every image shared in the past five day.

Select the Weekly or Daily Digest to receive every image posted to Wednesdays in Marblehead delivered directly to your inbox.  Weekly emails are sent on Wednesday at 11am. This list is kept private and not shared or distributed in any way.